For those who follow comics, Grant Morrison needs no introduction. Comic book writer and one of the most popular names in the realm of comics, his association with Batman, Doctor Who, Superman, X-Men and Spider-Man has been rather legendary to be honest. But away from the classics, little do people know that Morrison has been working in association with Indian comic house Graphic India for a while now – since 2010 to be precise.

Released in 2010, 18 Days in collaboration with artist Mukesh Singh was Graphic India’s take on the epic Mahabharata. Released as a YouTube series as well as books in print, the publishing house chooses to define 18 Days as “the the prototype for every war ever fought”. While this release received great reviews from across the world, Graphic India’s collaboration with the legendary Stan Lee was far from satisfactory for fans. Though the thought of Lee’s first Indian superhero excited us, it was quite disappointing to realise that Chakra at the end of the day was following Lee’s tried and tested formula of romanticising your “friendly neighbourhood superhero”. Much like Peter Parker. 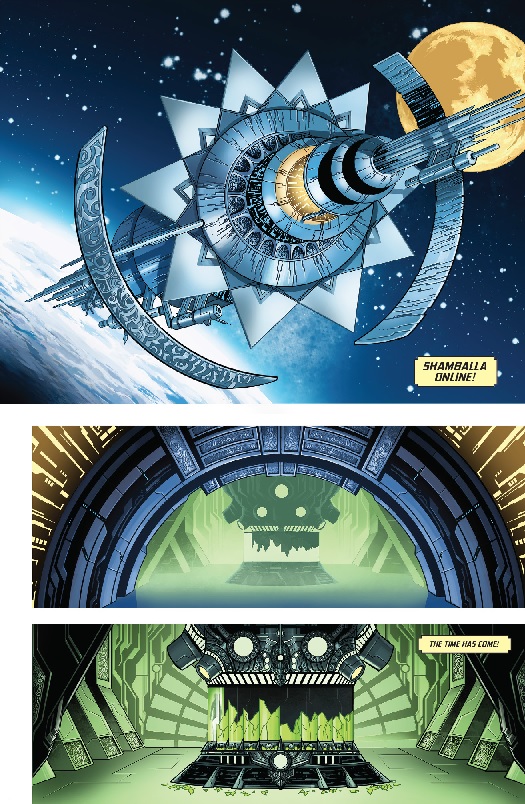 But come 2015, Graphic India is all set to take another shot at creating an incredible superhero – this time in collaboration with Grant Morrison. But for someone who has had so much of fame in the world of print, do digital comics make a difference? “I like comics in any and all forms,” says Morrison. “It’s a unique and adaptable medium. If I had to be honest, I still prefer print comics, mostly because I can read them in the bath!”

Taking the time to introduce Avatarex to his fans, Morrison says, “Avatarex is the story of an ancient, godlike super-warrior who is awoken from his slumber to defend humankind in the last days of the Dark Age – i.e. NOW. To maintain his powers and keep his feet on the ground, Avatarex must form a bond with a young man of impeccable character. As it happens, however, he ends up bonding with that man’s feckless, waster of a younger brother. The basic idea is this: can a godlike super-being elevate us all to his level – or will we drag him down to ours?” 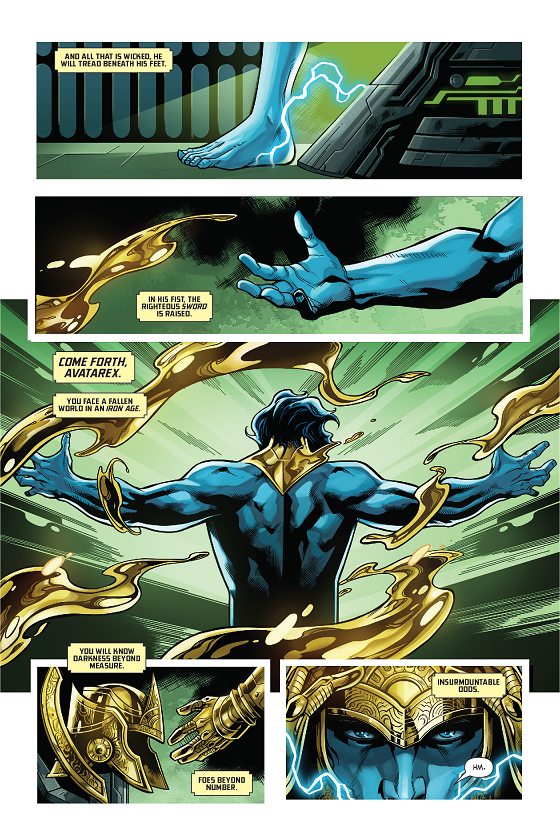 In an attempt to create a whole new universe of superheroes, Morrison is creating a big, sci-fi adventure series filled with super-beings, alien war-machines, monsters and mythic villains but grounded against the backdrop of modern India. With such a lot of hype surrounding this comic, all we can hope for is that this does justice to Morrison’s storytelling. 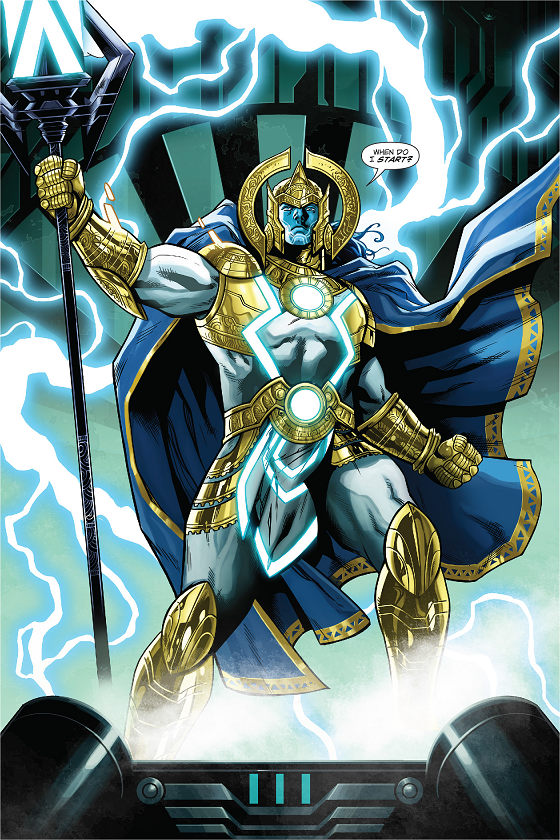 And finally, some excerpts from our conversation with Grant Morrison: 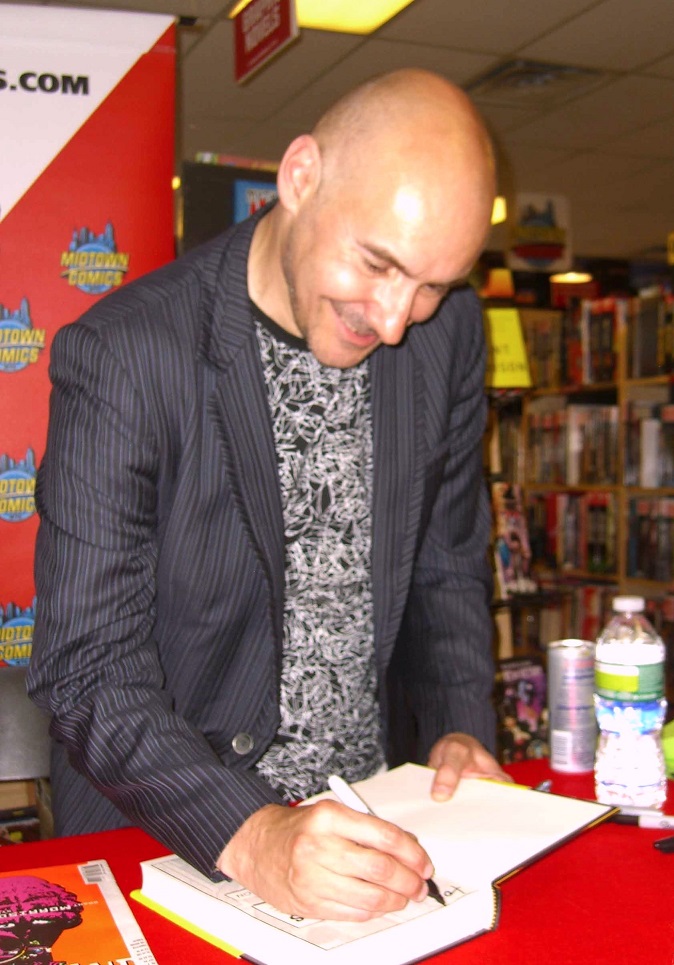 What are your thoughts of the Indian comic industry?

Like the teetotaller who works in a liquor store, or the confectioner without a sweet tooth, I have to admit I don’t really read a lot of comic books! Generally, I prefer not to look at other people’s work as I don’t like to be influenced by anything other than my own research.

I’m excited to learn that comics are becoming more popular again in India and as I’ve grown a little tired of the militarisation of the American superhero, and at the moment I feel I have more to say to an Indian audience.

I read a lot of the older comics when I was researching 18 Days but I’m not terribly familiar with what’s going on at the moment.

In the time you have spent working with Graphic India, what have been your favourite things and what things have you absolutely hated?

Getting to work with brilliant Indian artists like Mukesh Singh and Jeevan J. Kang is the best part about my Graphic India experience. I can’t honestly say there’s been anything I’ve hated so far.

Who or what according to you is a superhero, and why?

A superhero is a fictional character with powers and moral sensibilities above and beyond those of ordinary mortals, and who uses those powers in the service of his or her community.

How would you define your process of creation of 18 Days? How did you get familiarised with the stories and characters originating from Indian mythology?

It took a while – I read and re-read the Mahabharata in a number of different translations. I also read extensive commentaries on the Bhagavad Gita by respected sages and scholars. Then I streamlined the material through a kind of Western filter and brought the more science fictional or fantastical elements of the stories to the fore.

How would you introduce Avatarex to the uninitiated?

Avatarex is the story of an ancient, godlike super-warrior who is awoken from his slumber to defend humankind in the last days of the Dark Age – i.e. NOW. To maintain his powers and keep his feet on the ground, Avatarex must form a bond with a young man of impeccable character. As it happens, however, he ends up bonding with that man’s feckless, waster of a younger brother.

The basic idea is this: can a godlike super-being elevate us all to his level – or will we drag him down to ours?

Beyond that, I’m trying to create a whole new superhero universe based in India, with new Indian characters, so upcoming Avatarex stories will include the debuts of these new superheroes. It’s a big, sci-fi adventure series filled with super-beings, alien war-machines, monsters and mythic villains but grounded against the backdrop of modern India.

What advice would you give young creators who want to enter the world of making comics?

I’ll say what I always say: no-one in the entire universe has ever seen the world the way each of us sees it – one unusual perspective one individual view can be enough to change the world, so always be true to your own experience. If you fall in love, put the feeling in a story, if you lose a parent, put the feeling in a story. You can express powerful human emotions using big bold symbols in comics and by drawing on your own real life, you’ll make an honest emotional connection to your readers.  A good comic writer needs an unstoppable imagination, a powerful discipline, an ability to collaborate and a love of the form.

What are your future projects fans should look out for.

I’m very excited about the 120-page Wonder Woman complete graphic novel I have coming out from DC Comics next spring. I’ve been working on this one with artist Yanick Paquette and super-colourist Nathan Fairbairn for a few years and we just wrapped up the last of our edits I also have the Santa Claus origin fantasy KLAUS from Boom Studios. The first issue is out in October.