Written and illustrated by Ayesha Tariq, Sarah: The Suppressed Anger of the Pakistani Daughter is not the first comic from Pakistan that I am encountering. With feminist characters like Bloody Nasreen and the Burkha Avenger all poised to save the day, the concept of strong women ready to fight against misogyny, corruption and even stupidity seems to be one that has been readily embraced in the realm of Pakistani comics.

But away from this ideal world of superheroes and vigilantes, there are young women with dreams… dreams that are constantly thwarted by a conservative family who very obviously have double standards to maintain. 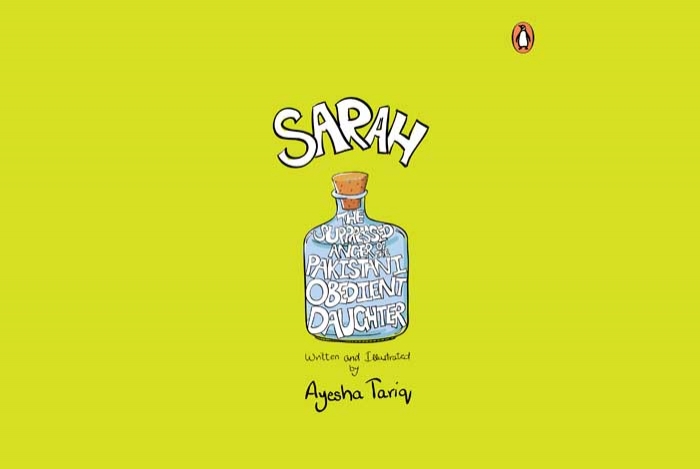 Sounds familiar? Does it not?

As the story of Sarah unfolds, we realise that Tariq, through her colourful, childish sketches and words has addressed something that a lot of young girls can relate to even in India. As an almost-eighteen Sarah expresses annoyance at her Rishta (matchmaking) Aunty trying to find a suitable groom from her, I suppress a chuckle thinking of all the Rishta Aunties who have pledged themselves to find me a suitable groom. And as Sarah is taught to respect her elders unquestioningly, I smile to see Tariq’s frustration about societal conditioning seeping into Sarah’s world. 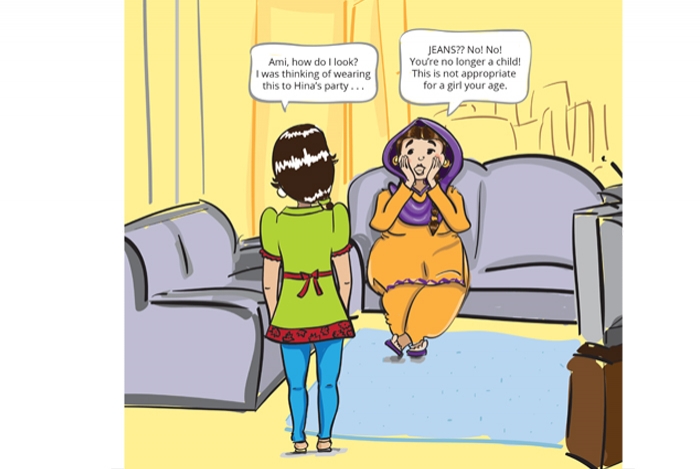 And as Sarah talks satirically about the ideal Pakistani daughter – one who is obedient, accommodating and good at bottling feelings up, you almost feel bad for her. It isn’t uncommon to swallow your ‘liberal’ thoughts for the sake of not upsetting your parents. It isn’t surprising to see Sarah’s rage erupt over a double spread towards the end of the book. Rage that demands answers, but sadly, rage that is calmed down and ushered into a bottle and shut up. But Sarah is not the story of a girl who will conform. It is the story of a girl who reminds you of gender-based discrimination that even the best of us face even in 2016. 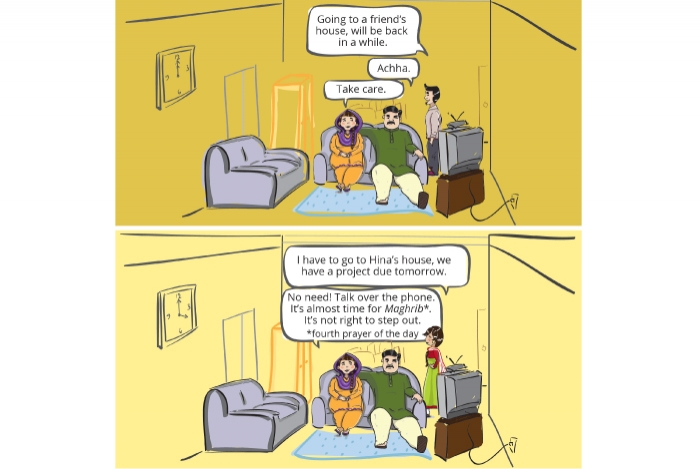 And while reading the book, we caught up with Ayesha Tariq for an exclusive interview. Here’s a peek into her wonderful mind!

ST: What inspired you to write Sarah?

AT: Tough thesis deadlines and a fight at home! The book was originally my thesis. I had proposed a few ideas to my advisors and this being the third one that I scribbled down because I had gotten scolded by my parents and didn’t think much of it. At that time, I had almost zero belief in my own ideas. I used to browse online and look at various works and always wanted to be as good, hence thinking that my ideas and skill are not good enough. I’m lucky that my advisors urged me to think more about the theme. So, I reflected over my own experiences, talked to different girls and conducted some surveys in order to draw a more relatable picture.

ST: Why did you choose the format of a graphic narrative?

AT: I had minored in photography, which was proving to be a very expensive and inconvenient subject for me, because I had to borrow equipment for it. So, I started using illustration as a cheaper and quicker route for my assignments. By thesis-time, I felt I wanted to up the level and really get into illustration and explore it. So, by this time I was very set on doing an illustrative project.

ST: Can you explain your process of creation to us?

AT: My process is a mixture of digital and analogue. The first thing was to decide the theme. Then comes mind-mapping, lists and brainstorming. Then I conducted surveys. Then I made a moodboard of inspirations, this can consist of visual styles, color schemes and content, even fashion trends. I finally got to making my characters, which were quite a few drafts, this was on paper. Simultaneously I would also list out the different instances in Sarah’s life and just mapping out the entire book. Then I start taking things to the computer. Friends and family would pose for me to draw various postures. I would roughly draw out scenes on paper and work on them digitally. Final prototype involved printing, sticking and binding. This is obviously a brief explanation, I am completely skipping the blood, sweat and tears haha.

ST: What’s the easiest part about making a comic? And what is the most difficult?

AT: I don’t think they are easy at all! As a person who is interested in narratives, be it through illustration, writing or improv, I become very invested in the characters. Being truthful to a character can be very easy and difficult at the same time. Sometimes its very difficult to separate yourself from the character. Hence as the illustrator and the writer, you do not want to draw or write something that may not be characteristic of your protagonist.

I also believe that sometimes people get so invested in the visuals that they don’t pay attention to the words – the story may be weak, or there may be continuity issues. From the time of conception till now, I had to tweak these issues as well.

ST: Do you have any more releases planned for the future? If yes, can you tell us a bit more about them?

AT: I surely hope I am able to do more books, but nothing planned yet.