“To the moralist prostitution does not consist so much in the fact that the woman sells her body, but rather that she sells it out of wedlock.” – Emma Goldman, writer and political activist.

John: a person who uses the services of a prostitute (via Urban Dictionary)

From shame-faced politicians, to familiar faces of the tinsel town, scandals have been nothing unfamiliar to us. But encountering a man who proudly accepts being a “john” and talks of his experiences fondly is an idea intriguing. Written and illustrated by Canadian cartoonist Chester Brown, Paying for It is one of the hardest books I have ever attempted to review. Brought up in a world where the term “prostitute” or “hooker” is mostly reserved for a woman of loose morals, something derogatory, coming face-to-face with a narrative that actually explores the life and times of a john is quite extraordinary. The story of just another john, this graphic memoir introduces us to a not-so-young, balding cartoonist who is having a rather hard time dealing with matters of the heart. After living through three years of celibacy following the break-up with his live-in girlfriend Sook-Yin (who still lives with him and at times, gets men of her choice over as well), Brown is tempted to pick up the phone and make a phone-call… one that is about to be the first of many.

For the quick to judge, this phone-call was a result of many thoughts and deliberations. Thoughts that range from a cynic’s view of love, the impermanence of romantic love, and friendship between opposite sexes. With the thoughts comes the realisation that he is perhaps better off by not getting romantically and sexually entangled with women he shares a special friendship with- one that allows him to talk and act without fearing repercussions of any sort. 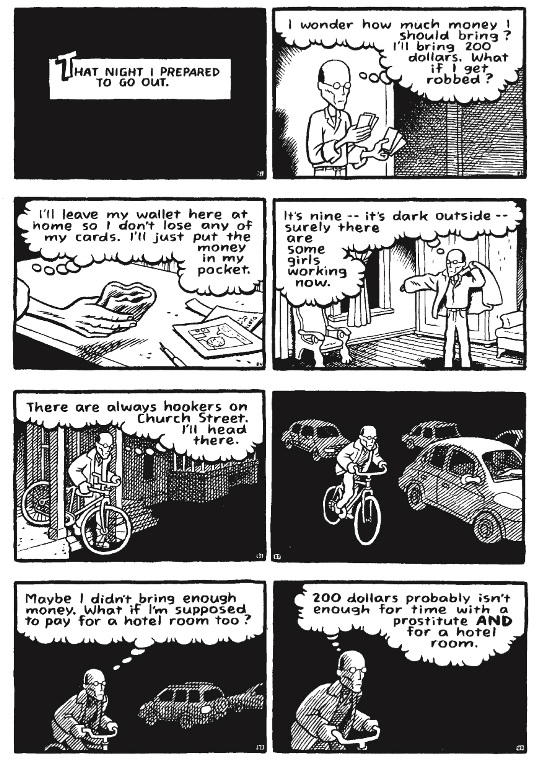 What follows is an extensive description of all the times he has paid for the services of a prostitute.

The graphical depiction of every single woman he has paid to have sex with however evokes a few questions… Was it fair to depict them in their glorious nakedness, magnifying each quirk to make them appear to be more than a series of names? Was it the right thing to do to talk to 23 women and craft a masterpiece out of the experience each one provided him with? While I might not have answers to all these questions, I realise that it is very easy to have idealistic views about this and to quote anarcha-feminist Emma Goldman. But how easy is the act of overcoming socially conditioned stigma for the average reader? Interestingly, this book was released in 2011- a time when a global movement to abolish prostitution had had come into being. Needless to say, within just six months of its release, Paying for It had achieved the status of a (sexually) graphic masterpiece. While of course this is not something for readers of all ages, it is something that everyone needs to read. Opinions that remain alien to society as we know it, calls for exploration. But most importantly, when maestro Robert Crumbs writes a good, nay, great introduction to a book, calling it all sorts of wonderful things possible, you know that amidst all the scandalous imagery, a great graphic novel has been created.